IN THEATRES NOW IN SELECT US AND CANADIAN CITIES

WITH UNRELEASED 2008 LIVE AT GLASTONBURY VERSION OF “HALLELUJAH”

This collection is a companion piece to the new documentary Hallelujah: Leonard Cohen, A Journey, A Song, which premieres at Tribeca Festival this month, and was also an official selection at 2021 Venice Film Festival and 2021 Telluride Festival. The film is a definitive exploration of the singer-songwriter as seen through the prism of Cohen’s internationally renowned hymn “Hallelujah.” Approved for production by Leonard Cohen just before his 80th birthday in 2014, the film accesses a wealth of never-before-seen archival materials from the Cohen Family Trust, including Cohen’s personal notebooks, journals and photographs, performance footage, and extremely rare audio recordings and interviews. The feature-length documentary contains moving testimonies from personal friends of Leonard’s such as Adrienne Clarkson and Larry “Ratso” Sloman, and recording artists for whom “Hallelujah” has become a personal touchstone like Judy Collins, Brandi Carlile, and Rufus Wainwright.

Hallelujah (Live at Glastonbury 2008)
Suzanne
Bird on the Wire
Famous Blue Raincoat
Chelsea Hotel #2
Who by Fire
Dance Me to the End of Love
I’m Your Man
Anthem
The Future
In My Secret Life
Recitation w/ N.L. (A Thousand Kisses Deep)
Show Me the Place
Come Healing
You Got Me Singing
You Want It Darker
Thanks for the Dance 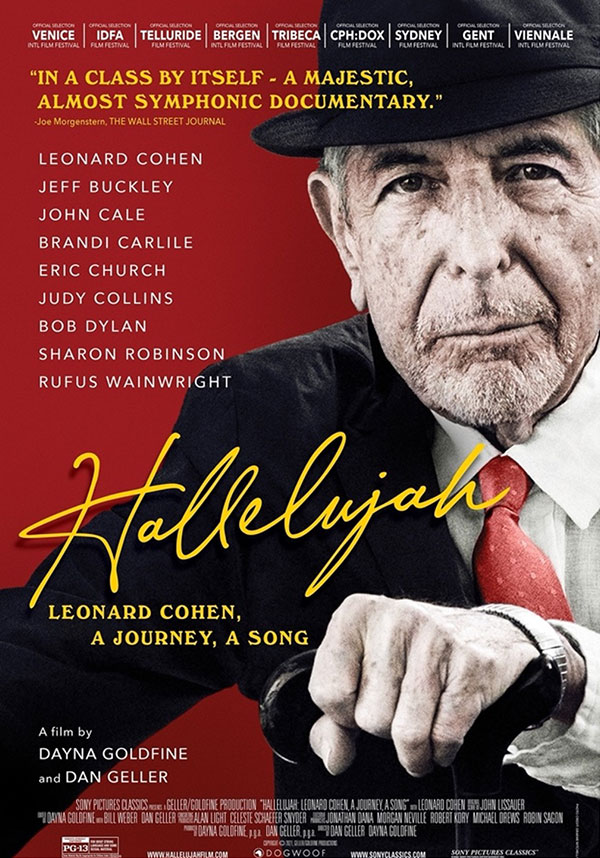